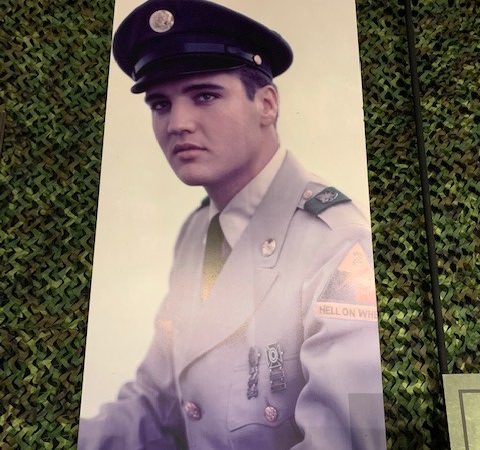 Let me start by saying that my family has promised that I am related to Elvis. What proof do I have? Absolutely none at all. My mom is mostly Italian, with some English/Iris/Scottish on her dad’s side, and allegedly, that’s where the connection lies.

I brought up this *very* credible fact to the people at Graceland, to try to get in for free, but shockingly, nobody bought it!

Okay let me back up. I had to go to Memphis for work in early February, which happens often. I really enjoy going to Memphis, mainly so I can eat the BBQ, but also because I get to hang out with my colleagues who are spread across the country/world in various roles like mine. Working for a large company, it’s easy to see your friends get spread across the world, so work events are doubly fun because they are also a great chance to catch up with wonderful people.

This time, they must have had a Graceland theme in mind. We stayed in a hotel near Graceland, and best of all, they planned an evening tour of the home, with dinner in his car museum. And it was totally worth it.

The tour was fascinating, with a great path through who he was as a dad, husband, neighbor, son, and yes, musician. He had very eclectic taste, and was truly larger than life in many ways.

But the best part of the tour, in my opinion, was the museum part, not just Graceland. The museum had not only his car collection, but also a look at his influence on other musicians, and his influence on what style was during that time.

As I went through the museum with my friends, we kept saying “Elvis was SO HANDSOME.” Because he was! The videos of him getting sworn in after he got drafted, or him doing his interviews, he was a humble, sweet southern boy. It was easy to see how he got so popular, particularly with the ladies. Unfortunately, it was also easy to see how he’d be a target for people trying to influence him or get him involved with drugs or other things.

Overall, my 15th cousin six times removed (joking, but clearly very distant) did well for himself, and it was definitely worth a trip to the world that is Graceland, with some time in the museum nearby! A definite must-visit if you’re ever in Memphis!