Every year, one of my jobs is to plan to the Leadership Team’s annual Christmas party. It’s one of my favorite and least favorite jobs of the year.

Least favorite, because it’s kind of a lot of work and I have a lot of other work to do to close out the year, like budgets, reports, Health of the Facility presentations, end of the year newsletter, etc. But favorite because it’s fun work! We’re playing a trivia game and a family feud game and I have cute presents for the game winners. 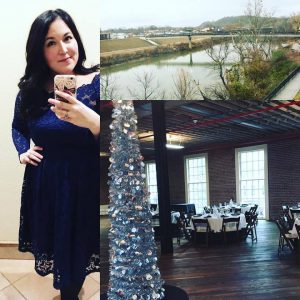 Last year, I planned a classic White Christmas party, with a room overlooking the river, lots of white linen and pretty silvery trees. It was beautiful. This year, I’m going the complete opposite: a fun, weird party at a magazine place (with all the desks cleared out for the party), a jazz band, and small plates with bourbon and wine pairings, with food like elk chops. It should be so fun.

Side note: Hunting is a big thing here in the south, and one time I was asking someone what people hunted. He looked at me like “bless your heart”, and said “deer”. I was like, “I know… I mean, like, white tail deer? Mule deer? Elk?”. Hunting in New Mexico is much more varied, I guess, than in Georgia! I used to work at an army base for my first seven years out of college, and we were pretty far out into the desert. We had so many damn animals in that mountain/desert area, and people also hunted Oryx.

Side, side note: Some people brought over the Oryx in like, the 70’s for big game hunting in New Mexico. They’re from Africa, and they’re like, 500 lbs. Seriously big. Too big for the coyotes to manage the population, so now they have to have people hunt them. They’re also not afraid of people because they’re biologically used to fighting, you know, lions and stuff. As part of my safety communications, I had to constantly remind people not to honk at them when they crossed the road, because they’d charge your car with these giant horns.

What about you? Any holiday parties coming up?